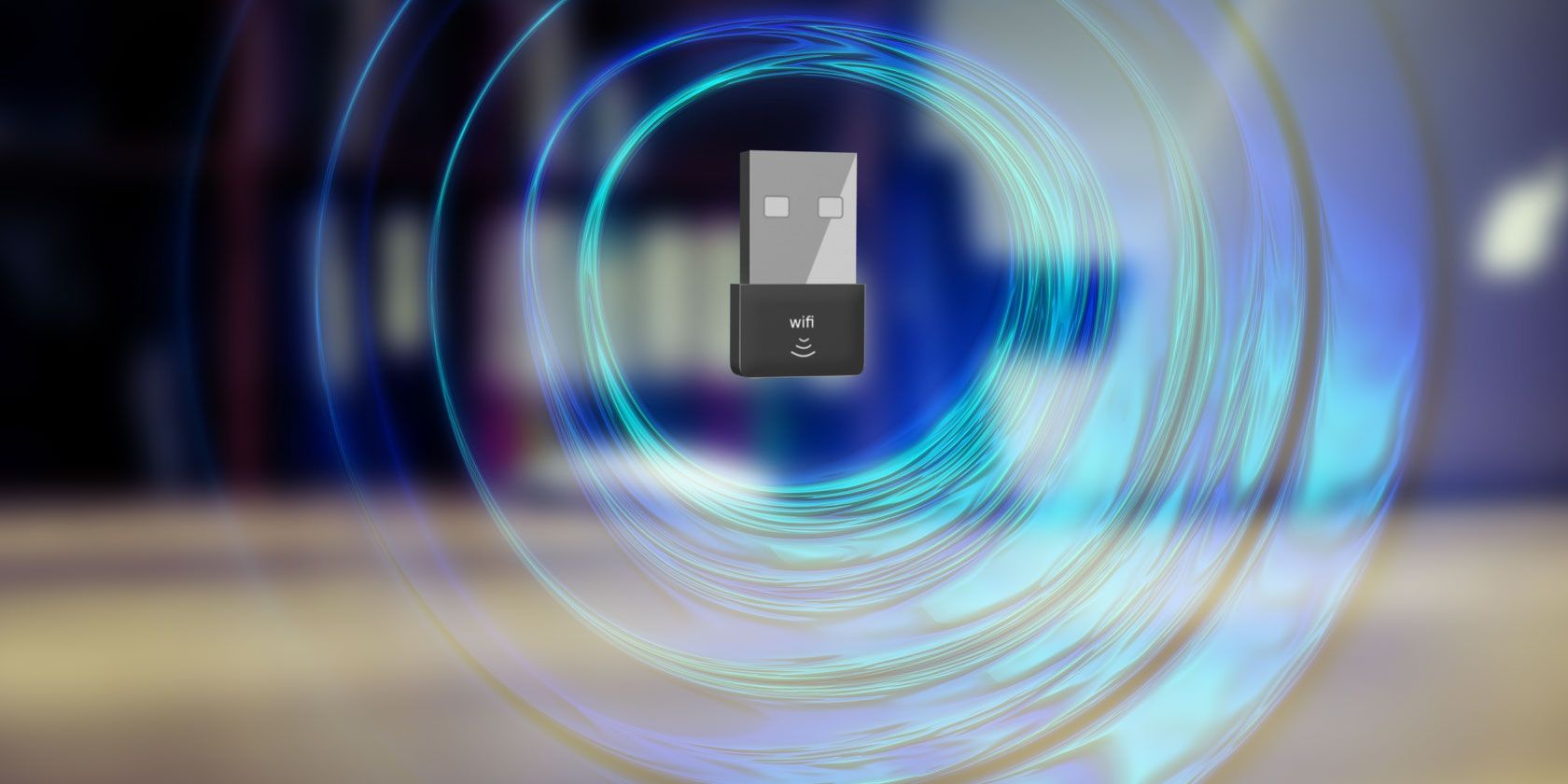 A dongle is a small device, usually in the general form of a USB flash drive, that plugs into another device to provide additional functionality. A wireless dongle, also called a Wi-Fi adapter, provides Wi-Fi capabilities to a device that is not otherwise Wi-Fi capable, such as a desktop PC without a wireless network card.

Dongles are useful because you can easily move them between devices, they don’t take up a lot of space, and the added functionality is convenient. But when you use Wi-Fi dongle, you may have some problems. In particular, it’s common to have slow wireless speeds that don’t measure up to what you get on other devices in your home.

Here are some reasons why your USB Wi-Fi adapter is slow and what you can do about it.

Wi-Fi devices can communicate using two different bands. The 2.4 GHz band is older and supported by most devices, but it is slower and more susceptible to interference. Meanwhile, the 5GHz band is faster and more reliable, but has a shorter range and doesn’t work with some older devices.

While modern wireless dongles tend to support both bands, your dongle can only use the 5GHz band if your router also broadcasts on the 5GHz band. If your router is not (at least) a dual-band router, then is stuck using the 2.4GHz band. Fortunately, most modern routers support the 5GHz band; consider a new unit from one of the better router manufacturers if you have an older model.

What is the problem with the 2.4GHz band? As a result, it is extremely narrow. In the US, there are only 11 channels to choose from, and even that is misleading because the frequency of each channel overlaps with the frequencies of neighboring channels. As a result, channels 1, 6, and 11 are the only channels that do not overlap.

Overlapping channels are a problem because wireless data waves can interfere with each other, resulting in the loss of data packets that need to be resent. Forwarding data packets takes time, which can slow down your wireless speed. With a lot of interference, the dropout can be significant.

This is made worse if you live in a densely populated building, such as a city apartment complex. In these cases, there are hundreds of devices around you trying to transmit Wi-Fi data. Even if you are using a channel that does not overlap, transmissions on the same channel can interfere. Therefore, a wireless dongle in the 2.4 GHz band has many obstacles to good performance.

If you must use 2.4GHz, make sure you’ve configured your router to use the latest Wi-Fi standards instead of “legacy” or “mixed” mode, which is limited for backwards compatibility.

However, if possible, you should use the 5GHz band with your Wi-Fi dongle. As long as your router and dongle support 5GHz, this is easy to do. The 5 GHz band has 23 non-overlapping channels and is not as susceptible to interference from other devices like microwaves. See ways to fix an unstable Wi-Fi connection for more tips.

2. Bad positioning of the Wi-Fi dongle

Depending on where your wireless dongle is located, the interference could start even before the signal waves reach your router. If your dongle is physically small, it will be right next to your desk, which probably has a metal casing. This can significantly reduce the reliability of the signal waves.

It’s not just your desk doing this: if your dongle is plugged in right next to a desk with metal legs, you may run into the same interference problem.

To partially solve this, you can buy a USB extender (try the Amazon Basic USB Extender for a reliable option), which plugs into your USB port, giving you more room to plug in the actual dongle away from the source of interference. Many wireless dongles include a USB cradle in the box, so give that a try and see if it helps.

Speaking of which, don’t forget that the positioning of your computer is also important. If the desktop you’re using the dongle with is in the basement, while your router is upstairs with concrete walls between them, that will affect signal strength. A Wi-Fi dongle will be slow when away from the router, just like any other device.

3. The lousy internal antenna of your Wi-Fi adapter

Nobody wants a huge antenna sticking out of their device. Also, internal antennas are cheaper to produce, so compact dongles are more affordable. An example of this is TP-Link N150 USB Wi-Fi Adapter.

You can point them toward the router for even better reception, and as mentioned above, they’re not as close to your PC’s internal electronics. An example of this is the TP Link AC600.

This difference is one of several ways that your Wi-Fi dongle can affect the speed of Internet you get on your device. If you are using an old nano dongle, you should upgrade to a Wi-Fi dongle with an external antenna.

They’re not pretty, but if you rely on Wi-Fi to get work done at your desktop, they’re well worth the investment and an easy way to make your Wi-Fi dongle work better.

When considering the best Wi-Fi dongle for your needs, there are a few details to pay attention to.

First are the dongle specs. A dongle labeled as 600 Mbps capable probably won’t support as much throughput per band. Instead, it could be 150 Mbps on the 2.4 GHz band and 450 Mbps on the 5 GHz band, for a “total” of 600 Mbps. This is obviously misleading information.

Make sure you get a dongle that matches the maximum speed of your internet plan on the band you plan to use. If you’re not sure how fast it’s getting to your home, sign into your account with your ISP and check your plan, then test your home network speed to see what you’re really getting. It’s not a bad idea to get a dongle that’s slightly faster than your network speed now, in case you upgrade in the future.

Another hardware limitation is the USB port that you plug the dongle into. USB 2.0 ports have a theoretical maximum speed of 480 Mbps, but due to protocol overhead and hardware inefficiencies, it will never reach that value. For best results, you should get a dongle that is USB 3.x and plug it into a USB 3 port, which has a theoretical maximum speed of 5 Gbps (faster than any modern home connection).

Finally, consider your maximum internet speed. If you’re paying for 25 Mbps down and 5 Mbps up, then no combination of router and wireless dongle is going to give you faster speeds. Since your ISP may not provide the maximum speed of your plan all the time, you may need to upgrade to a plan that is faster to see more speed from your USB Wi-Fi adapter.

One final thing to check when your Wi-Fi dongle is slow or unreliable is the USB port it’s connected to. In addition to the USB speed differences discussed above, you also need to make sure that the USB port the dongle is connected to is working properly.

Try moving the dongle to another USB port and see if that results in faster speeds. If you have the adapter connected to a USB hub, remove it and plug it directly into a USB port.

Apart from this, you should also see if you have the correct drivers installed for your dongle. On Windows, press Win + X and click Device administratorthen locate network adapters and find the name of your Wi-Fi dongle. Right-click and choose Update Driver > Find Drivers Automatically to see if an update is available.

If this doesn’t work, you should check if your dongle manufacturer offers specific drivers for your dongle model. Google the model name to find the official download page, then install any available driver updates and restart your PC. Then run another speed test to see if this made your Wi-Fi dongle work faster.

6. Maybe your Wi-Fi Dongle is not the problem

If you have followed all the steps above and you are still experiencing poor Wi-Fi dongle performance, your problem may not lie with the dongle itself. Similar to your ISP speed limits as mentioned above, your Wi-Fi speed may be slowing down because you are using too much bandwidth at once.

In situations where multiple people are streaming 4K videos, downloading large files, and doing other network-intensive activities, network performance will suffer if you don’t have enough bandwidth to handle them all. You will tend to find these problems exaggerated when using a poor quality Wi-Fi dongle.

If you’ve upgraded your dongle, optimized positioning and channels, and made sure you don’t have a hardware issue, you should analyze your bandwidth usage to see if that’s the real culprit. When everyone on the network tries to work at once, your Wi-Fi dongle will struggle, no matter how robust it is.

Is the Wi-Fi adapter too slow? Not anymore

Now you know what factors affect the speed of your Wi-Fi dongle and how to make it faster effectively. You will most likely need to update it to get the best results; Hopefully once you do, you’ll have an acceptable experience.

If you’re frustrated with Wi-Fi performance, connecting over Ethernet is much more reliable. Consider trying a wired connection if your situation allows.