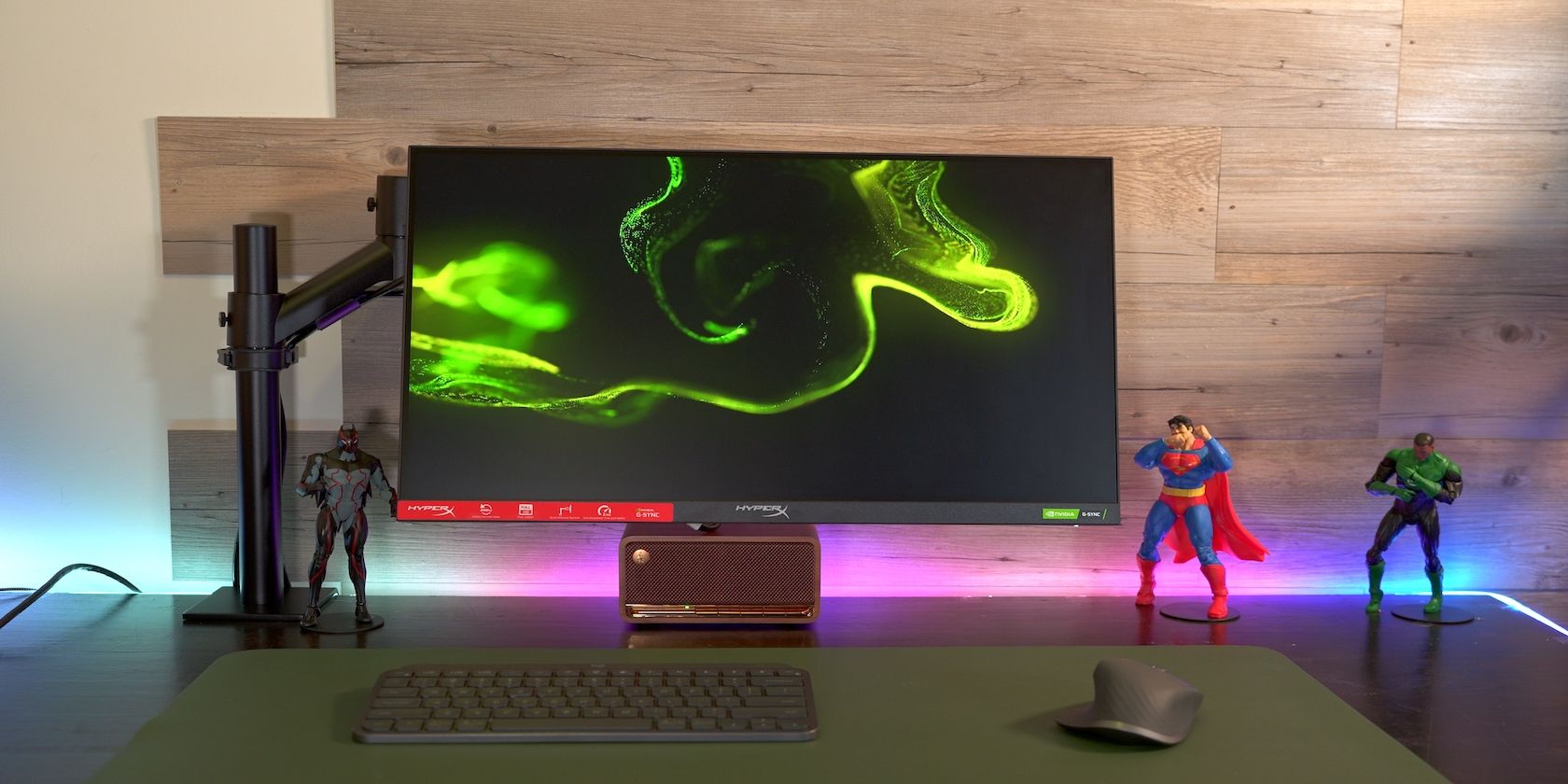 The Armada 25 is a 240Hz FHD monitor ideal for gaming and includes a heavy-duty monitor mounting arm in the box. While the specs and performance are impressive, we’re not sure they’re enough to justify the price in this highly competitive market.

HyperX is best known for its gaming peripherals, including headsets, keyboards, and more recently, microphones as well. Having been acquired by HP in 2021, HyperX later announced that it would be expanding its gaming lineup. A few months ago, HyperX revealed the Armada series of monitors, consisting of the Armada 25 and 27.

The Armada 25, which we’re reviewing today, targets more competitive gaming with a smaller 24.5-inch FHD 240Hz display. The Armada 27 has improved image quality with a QHD HDR 400 display but it’s limited to 165Hz. At $450, the Armada 25 isn’t cheap and faces a lot of competition from similarly sized and even larger monitors that cost less. So why would you choose this?

The Armada 25 has impressive specs, though, at this price point, it’s certainly not amazing. Armada 25 uses a matte IPS panel with 400 nits of maximum brightness and supports 95 percent of the sRGB color gamut. It has a 1ms response time and is compatible with NVIDIA G-Sync 4, eliminating screen tearing, stuttering, and input lag.

Input selection is shared with Armada 27: one DisplayPort 1.4 port and two HDMI 2.0 ports. An HDMI and DisplayPort cable is included with your purchase, but note that the limitation of only having HDMI 2.0 instead of 2.1 means that full 120Hz compatibility will not be supported on consoles like the Xbox Series X. Higher refresh rates high will only be possible using a PC with DisplayPort.

As this is only an FHD monitor, performance should be identical regardless of whether you are using the HDMI or DP connection. A bigger drawback, however, is the lack of a 3.5mm or USB audio jack which can detract from the simplified and convenient approach HyperX is going for with these monitors.

As someone who often makes use of these auxiliary ports to avoid extra cabling, I could see that this could be a deal breaker for some users.

The Armada 25 has slim bezels on all four sides of the monitor with a slightly thicker plastic bottom that features a white Hyper X logo.

This makes it easy to create a perfect dual-monitor setup, however the larger bottom bezel might encourage you to flip the monitor over if you plan on stacking them, or go for a triple or even quad monitor setup. On the right rear, you’ll find a power button and a directional pad for the OSD menu, which controls your usual settings and image adjustments.

HyperX believes that its new monitors offer added value and convenience that some gamers will appreciate. Instead of a traditional stand, the HyperX Armada 25 and Armada 27 are the first gaming monitors to include a monitor head and ergonomic arm with your purchase.

While 25″ and 27″ monitors generally don’t require very large desk stands, using an arm helps you save extra desk space and gives you a more minimalist look if that’s what you’re after. With my fairly narrow desk, using the arm made it much easier to use a larger mouse pad and position my keyboard the way I liked it.

By contrast, larger monitors like the MSI MPG Artymis 343CQR, which we recently reviewed, can make using your peripherals especially difficult unless you have a deep desk that can accommodate the extra space needed for the larger, oddly-shaped stand. from your monitor.

The Armada arm attaches to the back of your desk using the included C-clamp. It’s compatible with desks up to 2″ thick, but for thicker desks (up to 2.4″), a grommet mount is also included if you don’t mind drilling holes. With the arm installed, the monitor is similarly attached to the VESA mount and locked.

Like other monitor arms, you can adjust its tension to your preference using a flat head screwdriver or Allen key. I found the arm to be perfectly calibrated right out of the box and I could effortlessly push, lift or rotate the monitor to any position I wanted, even vertically. The arm held the monitor in place every time without a hint of unwanted movement. The arm also has built-in cable management to keep your desk tidier.

In addition to the extra desk space you get by adding peripherals, the Armada Arm helps you correctly position your monitor at the correct height to maintain a healthy posture. If you’ve only used one monitor mount, chances are your monitor is too low or too high, causing neck, back, and eye strain.

If you can mount the monitor using the clamp on your desk, I would highly suggest using it over the grommet mount as this will give you more flexibility to move it around as needed. One of the few downsides for some users would be the lack of a traditional stand which could be useful if they plan to pack up and use the monitor in different areas frequently, LAN parties for example.

With the added size and weight of the monitor arm, it wouldn’t be very practical to pack it regularly. While you could easily purchase a compatible monitor mount, that would incur additional cost, and for those users, the Armada series probably wouldn’t make much sense.

The HyperX Armada Arm Single Gaming Mount retails for $109 on its own, which is pretty competitively priced compared to other third-party monitor mounts that offer the same build quality and fit. While you can find several cheaper options for around $30 to $40, they are usually made of plastic rather than metal.

I’ve used various cheap plastic monitor arms that claim to support the weight of my monitor, but eventually start to give out and lose their strength or worse; they can crack and break when you try to readjust their tension. You’re also limited to one monitor, with no option to expand capabilities in the future.

With the Hyper X Armada add-on gaming mount, which costs $80, you can have up to four 25-inch monitors or two 27-inch monitors mounted on a single gaming mount. So if you were planning to add a monitor arm to your setup, you can “save yourself the hassle of looking for a compatible desk mount” and get a high-quality one that can be expanded later right out of the box.

This is a unique advantage of the Hyper X Armada series, which could make its premium cost over the competition worth it for some gamers.

For many competitive esports games, a 23-25″ FHD 240Hz monitor is the sweet spot for size, speed, and fidelity. Everything felt smooth hitting 220-240 FPS in games like Overwatch 2. With G-SYNC, there wasn’t any noticeable tearing, and images on the screen looked sharp without any blur.

At 90 PPI, the pixel density isn’t the highest, but you’ll still be able to read smaller text. While a QHD or 4K monitor will be sharper, you probably won’t notice much of a difference on a smaller monitor like this. Unlike the Armada 27, VESA Display HDR 400 isn’t compatible with the Armada 25, which, while not super bright, can make your HDR content more eye-catching.

The default picture profile looks good, and for most users it should have enough contrast and color while still looking accurate. The Armada 25 has rich blacks and will have a slightly better contrast ratio than most IPS monitors at 200:1, which is second only to VA panels.

The Armada 25 is a great option for competitive gaming, but for a more everyday monitor that can also be effective for content creation and other media consumption, you might want to consider a larger option like the Armada 27. While It’s not that fast at just 165Hz, but the $50 upgrade gets you more screen size, resolution, and punchier colors, which may be a worthwhile trade-off for some.

Although the included $109 mounting arm adds a lot of value and benefits, the Hyper X Armada 25 is still very expensive, even compared to other monitors in the $300-$400 price range. You could easily save over $200 by choosing another option. There are monitors with similar specs like the $260 Dell S2522HG (we reviewed the 24-inch model last year), which not only offer very similar performance, but also include multiple USB ports and a headphone jack.

You can also find bigger, curved, and faster monitors like the COA C27G2Z, which has FreeSync and is only $199. Perhaps as the Armada line matures, we’ll see pricing become more competitive. Still, at its current price of $450, this is a very premium option for the added convenience of including an arm in the box.

It’s exciting to see HyperX expand into the monitor space, and its debut Armada 25 and Armada 27 are great options, but very expensive. If you want a fast and stylish gaming monitor with a powerful and articulating mounting arm included in the box, then the Armada 25 is currently the best option. But for the Armada to be a strong recommendation, in addition to a $100 price reduction, I’d love to see the addition of USB ports, an audio jack, and maybe even a built-in speaker.