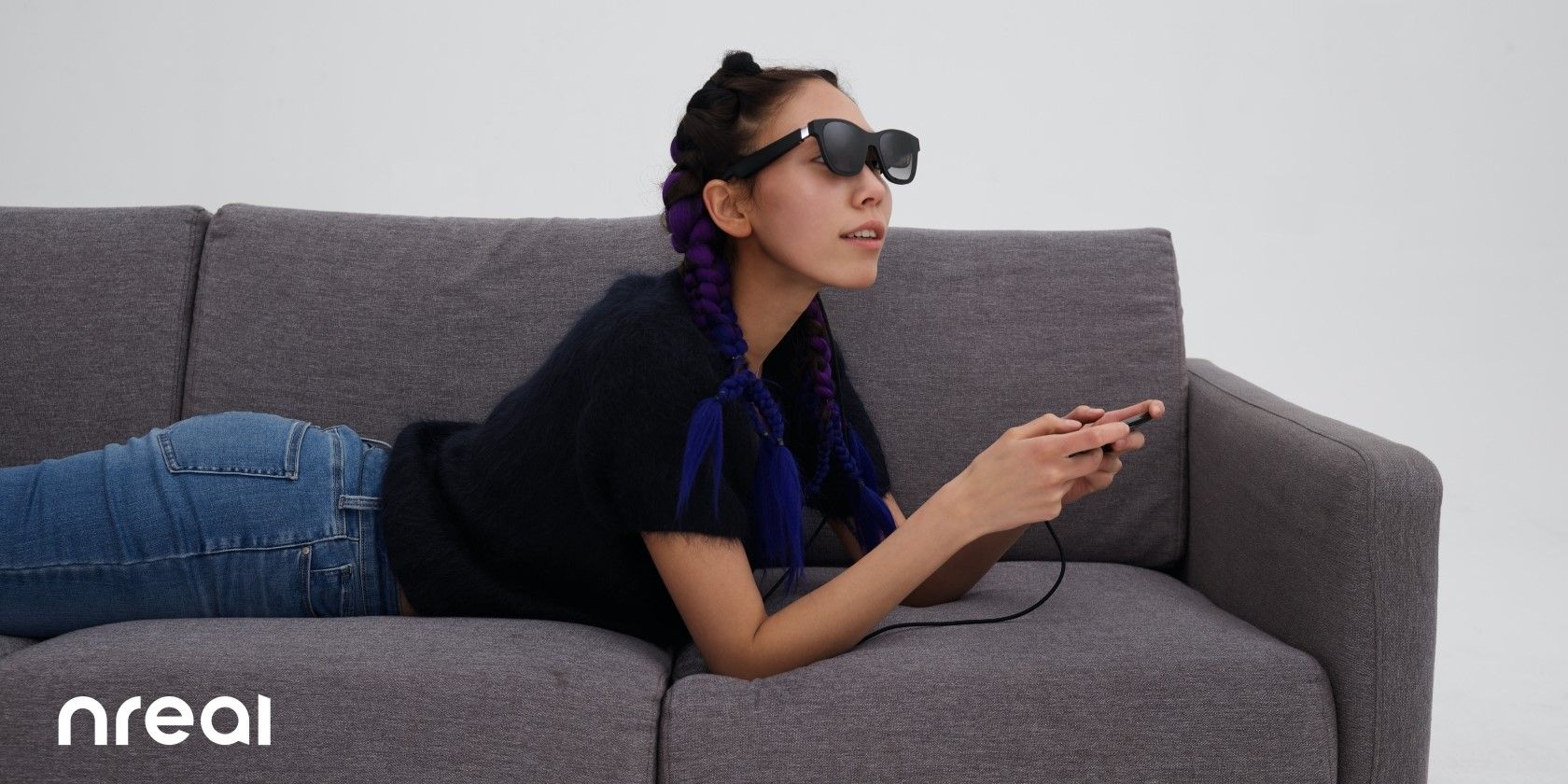 Dubbed by many as the ultimate portable gaming device, Valve’s impressive Steam Deck enables desktop and cross-platform gaming, all on a single portable machine. However, this much-celebrated device is far from perfect, and many users find flaws and limitations in the Steam Deck that affect their gaming experience.

Introducing a pair of Nreal Air AR Goggles could be the solution to these Steam Deck glitches. From improved graphics to preventing aches and pains, we explain why the Nreal Air Goggles are the best accessory for your Steam Deck.

What are Nreal air goggles?

Nreal Air glasses are wearable augmented reality (AR) smart glasses that allow users to see a projection of their connected device’s screen generated over their real environment. Instead of delivering a fully immersive experience that you’d find with VR headsets, Nreal AR glasses demonstrate the potential of real-world mixed reality. (Learn more about the differences between augmented and virtual reality.)

Designed to resemble a sleek pair of sunglasses, the Nreal Air offers more comfort and discretion compared to classic AR glasses, which are often bulky and some require a full wraparound headband to secure them to the head.

The Nreal Air headset claims to be a “gaming companion like no other” and is compatible with some USB-C devices, including Android, Mac, and Steam Deck. He Nreal official website has a compatibility list, so you can check if your current devices will connect to these AR glasses

For now, let’s take a look at the Nreal Air Goggles and your Steam Deck.

How to use the Nreal Air Goggles with your Steam Deck

Connecting your Nreal Air glasses to your Steam Deck couldn’t be easier. There are no apps or software to download and install – just plug the angled end of the provided USB-C cable into Nreal Airs and the other end into your Steam Deck. Your Steam Deck will automatically recognize your AR glasses as another monitor and adjust the resolution accordingly.

How Nreal Air Goggles Can Enhance Your Steam Deck Experience

The Steam Deck is an excellent piece of gaming equipment, although it does have some limitations. Some common complaints about the Steam Deck include its heavy weight, which can cause wrist pain and other pain, as well as its restricted screen size and display quality.

Enter the Nreal Air glasses. From solving common problems to improving your overall gaming experience (further supporting the argument that the Steam Deck could replace all your gaming tech), here are five reasons why the Nreal Air Goggles are the best accessory for your Steam Deck. .

The Steam Deck display is fine, but at only 1280×800 pixels with an LCD screen, you risk losing the battle between the Nintendo Switch (OLED) and the Valve Steam Deck for the best handheld console. However, pairing your Steam Deck with the Nreal Air Goggles will upgrade your display to a stunning 3840×1080 pixel Full HD OLED display (1920×1080 pixel resolution per eye).

With invisible internal speakers that are built into the stems of the goggles, you’ll get a fully immersive audio and visual experience with a pair of Nreal Airs plugged into your Steam Deck.

Forget about large external monitors, you can transform your 7” Steam Deck screen into a 130” Full HD screen through Nreal Air glasses. This feature is probably the most compelling, as the difference a large HD screen will make to your gaming experience is unmatched, especially since it’s packed into a compact pair of glasses.

This immersive cinematic experience works best when you’re facing a blank wall without overly bright lights, although you shouldn’t face any problems in a well-lit room. The Nreal Airs come with a lens cover plate that will block some external reflections if you want to use the glasses in bright conditions.

One big reason Nreal Airs are an essential Steam Deck accessory that you’ll want to consider buying is that it will save you from common gaming aches and pains.

Weighing in at over a pound and a half, Steam Deck can cause serious wrist pain when worn for an extended period of time. Instead of spending hours straining your wrists (or even hunched over with your arms resting on a table for weight bearing), connecting the Nreal Air Goggles will allow you to painlessly extend your Steam Deck play. You can relax your posture and have your hands and Steam Deck resting on your lap, avoiding those common gaming aches and pains.

In addition, the Nreal Air is also lightweight and adjustable to fit your face for maximum comfort. Three different sized nose pads are supplied to find the right fit for you, so you won’t feel uncomfortable wearing the glasses while gaming.

Alternatively, Lensology It promotes itself as the online store to buy Nreal Air prescription inserts and offers worldwide shipping.

Since the Steam Deck is a portable device, you need to make sure that all the accessories are equally compact and lightweight. Nreal Air goggles not only meet these requirements, but also require little maintenance. There’s no internal battery to worry about charging, power is provided by your Steam Deck, which also means one less adapter to pack for travel.

Because you can also use the Steam Deck as a desktop computer, pairing the device with Nreal Airs means digital nomads can work on a 130” screen, or even a triple monitor setup on Mac, without having to pack monitors. bulky screen.

While the Nreal Air Glasses are a great gaming accessory, it’s worth noting that they’re similar in price to the Steam Deck. However, the benefits of an enhanced Full HD portable display and reduced risk of carpal tunnel syndrome help justify the cost.

Wider compatibility for Nreal Air glasses is also rolling out. At the time of writing, Macs equipped with M-series chips running macOS 12.0 and above and some Android phones support Nreal Airs. You can also connect your Nintendo Switch, though you’ll need to purchase a special adapter for this to work.

If you’re looking for a solution to common Steam Deck complaints, or if you just want a portable display that you can play and work on, then Nreal Airs is the best Steam Deck accessory for you.